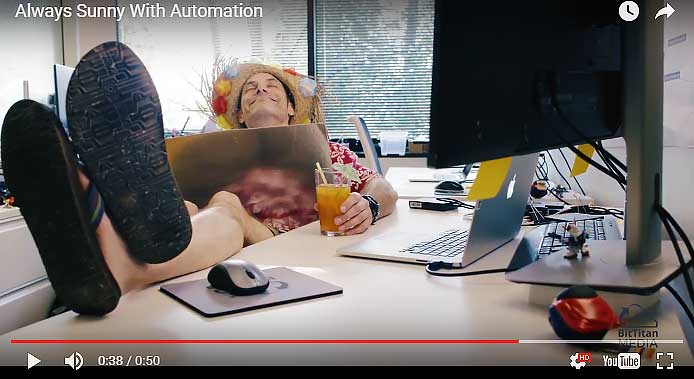 A work-life without automation for your daily processes can feel like a horror movie. The rattling noise of your fingers rapidly clamoring on the keyboard, the migraine brewing in the back of your head, and the stacks of empty coffee cups falling all over your desk. All you’re missing is an eerie Alfred Hitchcock musical score blaring in the background.

Okay, maybe it’s not that intense, but simple tasks taking up a majority of your time can be a nightmare when you’re trying to get real work done. Implementing automation for day-to-day processes, in comparison, feels like a day at the beach. You can sit back, relax, and let the computers do the work for you. It may sound too good to be true, but it’s a reality easily within reach.

At BitTitan, we’ve been adamant about the need for increasing automation in your company. We’ve even gone as far as to say you should automate everything. And with good reason. Your time is precious. Time spent on setting up coffee dates or other innocuous to-dos, like opening and closing projects, could be better used for business-critical work.

This isn’t just a great tool for yourself, but for your customers as well. They’ll thank you for streamlining their business and getting those pesky duties out of their queue. Not just that, but if you can lower your own margins, you can make a strong case for the value and speed that you bring to your clients’ works. It’s a win-win for you both.

Embracing automation isn’t just for convenience either. It’s becoming an essential factor to MSPs and businesses across the country. Don’t get left behind on this new norm. As we’ve said before, automation is about survival. Even if you feel like your business is running well as-is without automation, it won’t be sustainable for much longer. Get on board before it’s too late so you’re not living the first half of this video for eternity.

Channel Insider discovered that 75% of IT service providers believe data-driven automation would give them an edge with their services, but only 8% are actually using data-automation to transform their data into actionable recommendations. That’s a huge opportunity being missed. We know it exists, but making the leap can make ITSPs uneasy. Rest assured, you won’t be regretting it once you’re saving loads of valuable time.

With automation, your sunny days are ahead of you. Grab a Mai Tai (after hours, of course), set your desk chair to recline, and let the work do itself. Your anxiety-filled, horror movie days are officially over.

Learn more about how MSPComplete automates business processes and helps you standardize service delivery. You can get started free!