You’ve probably heard that agricultural livestock are responsible for a portion of the greenhouse gases that contribute to climate change. It’s true. Ruminants like cattle and sheep produce methane through a process in their digestive systems called enteric fermentation. Then there’s the nitrous oxide and methane that’s produced from decomposing manure piles. It turns out we can blame nearly 6% of greenhouse gas production on barnyard animals and what they leave behind.

Considerable focus goes into reducing greenhouse emissions from vehicles, manufacturing, and even agriculture – as it should. But truly addressing climate change will require concerted efforts in every industry. While digital technologies are often the ‘greener’ way to do things, every source needs to be examined for opportunities to decrease greenhouse gas production. This includes approximately 17.5% of emissions from the energy used to light, heat, cool, and electrify buildings. Around 7% of those emissions are from commercial buildings, the category that includes data centers.

Estimates are that about 2% of total greenhouse gas emissions can be attributed to data centers. While this is a small percentage of the whole, it’s not insignificant. And every bit counts. There are tangible opportunities for increasing energy efficiency in data storage and transmission. Implementing these measures now will help mitigate the impact of increased data use in the future.

This Earth Day is a chance for people in every industry to understand their impact on the global climate and identify actions they can take to make real change. While livestock farmers examine ways they can reduce harmful greenhouse gases, those of us in the tech industry can focus on our server farms.

According to the U.S. International Trade Commission, there are nearly 8,000 data centers globally, with about 33% of them located in the United States. While you’re unlikely to encounter greenhouse-emitting animals roaming around, data centers nonetheless have a reputation for being energy hogs. Servers require considerable amounts of energy, as do lights, fans, monitors, security, and cooling systems. Much of this energy still results in the production of greenhouse gases.

In the past decade, human energy has been flowing into innovations for decreasing the climate impact of data storage and transmission. In fact, according to the International Energy Agency, the industry’s share of global electricity use has hardly changed since 2010, even though the number of internet users has doubled and global internet traffic has increased 15-fold. This comes from the use of more efficient hardware as well as green innovations in buildings and cooling systems.

But most experts believe that continued high demand in the technology sector will fuel growth that will eventually outstrip efficiency gains. So the quest for lower energy consumption continues, especially as companies that are still hosting in-house systems are moving to the cloud.

On the face of it, it would seem that energy is energy, but according to a report by 451 Research, moving applications to the cloud could compress the energy footprint of a workload to one-fifth compared to running the same workload on-premises. In addition to the efficiencies of shared infrastructure, data centers use virtualization software that enables operators to deliver greater work output with fewer servers.

Tackling climate change in our global data infrastructure is an all-hands opportunity. As individual companies continue moving to the cloud, we can increase efficiency workload-by-workload. Meanwhile, the largest cloud providers, including AWS and Microsoft, are making bold commitments to address their climate impact. In 2020, Microsoft announced plans to be carbon negative by 2030. And they plan to shift to 100% renewable energy by 2025 for powering their data centers, buildings, and campuses.

This Earth Day, the world is recognizing that it’s not enough to simply try harder when it comes to addressing climate change. From the farms that feed us to the server farms that fuel our data economy, it’s time to move together toward zero greenhouse gas emissions. BitTitan is proud to do our part by helping companies increase efficiency by migrating to the cloud. With MigrationWiz, every day can be Earth Day. 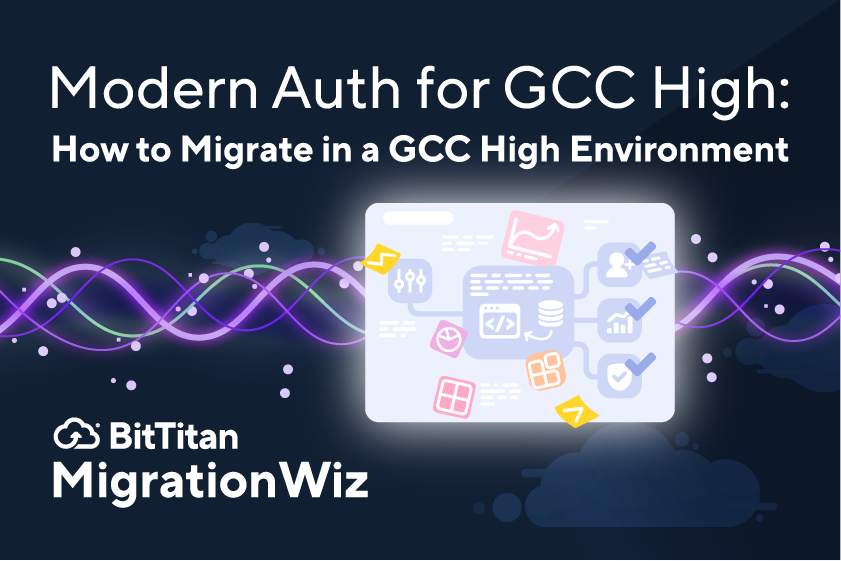 Modern Auth for GCC High: How to Migrate in a GCC High Environment

Modern Auth for GCC High: How to Migrate in a GCC High Environment If you’re an MSP working with the Department of Defense (DoD), or organizations that support the DoD, you already know that your customers have unique requirements for their cloud environments....